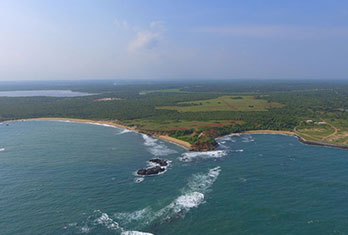 The life of Ravana, one of the most powerful beings ever to roam the universe, if Hindu legends are to be believed, had unfolded in the small island Sri Lanka, where he ruled with mighty power over gods, humans and demons. Valmiki’s Ramayana paint Ravana as a tyrant of mighty power who was holding the gods at ransom, and he continues to be treated as a blackguard in India even today. In the classic text, he is found kidnapping Rama's wife Sita, to claim vengeance on Rama and his brother Lakshmana for having cut off the nose of his sister Surpanakha. Yet Ravana of Sri Lanka is portrayed to be a different king and a human. He is described as a devout follower of the god Shiva, a great scholar, a capable ruler and a maestro of aveena, known as the ravanhattha. The story goes that Ravana in order to please his mother had decided to bring the mountain Kailash to Sri Lanka. As he lifted up the mountain, God Shiva was angered by his arrogance and pushed it back down, trapping Ravana. The King of Lanka had torn off one of his own arms and made a musical instrument, ripping out sinews to form the strings. He used the newly invented ravanhattha to sing the praises of Shiva, creating music of such beauty that Shiva wept and forgave him. According to Hindu mythology Ravana was born to a great sage Vishrava and his wife, princess Kaikesi. He was born in the Devagana, as his grandfather, the sage Pulastya, was one of the ten Prajapatis or mind-born sons of Brahma and one of the Saptarishi or the Seven Great Sages during the age of Manu.Ravana’s siblings include Vibhishana, Kumbhakarna and Ahiravana and a step brother Kubera, from whom he usurped the Kingdom of Lanka.

Lanka was an idyllic city, created by the celestial architect Vishwakarma himself and was the home of Kuwera, the treasurer of the gods, when Ravana demanded Lanka wholly from him, threatening to take it by force. Although Ravana usurped Lanka, he had been a benevolent and effective ruler. Lanka flourished under his rule and Ravana had proceeded on a series of campaigns conquering humans, celestials and demons.

It is said that Ravana ruled Lanka for several hundred years prior to the times of Ramayana, when he was killed by prince Rama for kidnapping his wife Sita.

Yet some believe Ramayana to be a semi-fiction woven around a real King who ruled over Sri Lanka from 2554 to 2517 BC.Sri Lankan lore has it that Sri Lanka under the scholarly Ravana saw great advancements in science and medicine. The pushpaka vimana or the aeroplane which he flew is held as an example of great scientific achievements made during his regime while Ravana also holds a high position as a physician and there exists, to this day, seven books on Ayurveda in his name. He is also believed to have authored Ravana Sanhita, an anthology of Hindu astrology and his description as a ten-headed person, Daśamukha or Daśagrīva, is believed to be a reference to his vast knowledge and intelligence.

His Kingdom had mainly concentrated around the Eastern and Southern corners of the country and believed to have been lost to the sea with the years. 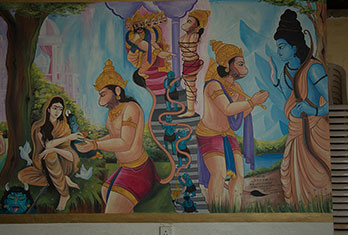 Some even go as far as to insist that Ravana was a Buddhist king and holds him to be the creator of monasteries found in Sri Lanka like Kuragala and Rahalgala. The country is filled with locations which are linked to the Ravana legend like SitaElisa in NumaraElisa, which is believed to be a prison of Princess Sita while Wariyapola and Horton Plains are considered to be the landing sites of his flying machine. Rumassala, a mountain peak by the Southern oceans of Sri Lanka is too linked to the Ravana legend and is held to be a part of the Himalaya Mountain. The mountain filled with medicinal plants was allegedly brought to Sri Lanka to treat the injured of the Rama-Ravana war was left in the country and is still filled with herbs of rare medicinal value. Adam’s Bridge, a chain of limestone shoals, between Rameswaram Island, off the south eastern coast of Tamil Nadu, India, and Mannar Island, off the north western coast of Sri Lanka too is connected to the legend of Ravana. Also known as Rama-Sethu or Rama’s bridge the land mass is believed to be a bridge built by monkeys interconnecting India and Sri Lanka and enabling the crossing of Rama’s army. Investigations conducted by Indian National Remote Sensing Agency had suggested that the land connection could be a manmade structure built 5000 to 3500 years ago. Yet Sri Lankan Ravana fans contradict its origin and its builder. Sri Lankan historians believe that the bridge was built by Ravana and was a floating structure connecting Lanka with lands in India.

According to them the bridge was later used by Rama’s army who crossed boundaries to Ravana’s Lankapura and overthrew one of the greatest rulers of the world with the assistance of his brother Vibishana, bringing down one of the most advanced civilisations in the history.